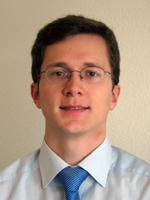 In a natural environment, speech signals seldom appear in a pure form, usually acoustic background noise or echoes are superimposed.

The human being overhears noises with a small noise level, can even listen specifically to a conversation partner in a vocal whirlwind (so-called cocktail party effect). On the other hand, too long echoes, as they can occur when communicating via hands-free equipment, he finds annoying.

In addition to the known single-channel method for acoustic noise suppression, sensor group signal processing is becoming increasingly important. The recording area of ​​the sensor group composed of a plurality of microphones is aligned electronically to the desired speaker (beamforming). By evaluating the voice signals recorded by the sensor group, it is also possible to determine the position of the speaker in the room.

Compared to the classical sensor group processing from antenna technology, there are clearly different frame conditions in the acoustics: The speech signal is in the baseband, the localization and recording takes place in the near field of the sensors and the signal is not produced at a point source but at the mouth, larynx and ribcage.

Research at the Chair of Systems Theory and Signal Processing is currently aiming at the processing of speech signals by means of microphone sensor groups under difficult boundary conditions such as strongly reverberated rooms, poor signal-to-noise ratio or real-time requirements.

To the top of the page